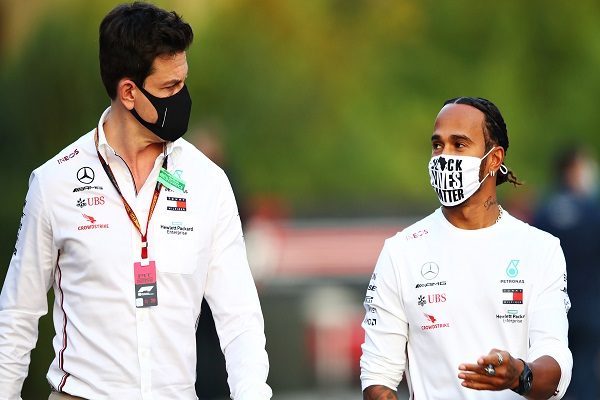 Toto Wolff has said that it ‘will take time’ for Mercedes to match the pace of Ferrari and Red Bull, but insists his team are ‘working hard’ to ‘reduce the other teams’ advantage’. Mercedes have been lagging behind their rivals due to a ‘porpoising’ issue – which causes the car bounce up and down on the straights. As a result, Lewis Hamilton and George Russell are finishing around a second behind Ferrari on each lap.

Therefore, Mercedes have taken their cars back to the factory in Brackley, Northamptonshire, to fix the issue. However, Wolff says his drivers must be ‘realistic’ as it will ‘take time to make the gains we want’. ‘We know we haven’t got the pace of the Ferrari and Red Bull right now. But we’re working hard to reduce their advantage,’ Wolff said. ‘There’s been a lot of hard work over the Easter weekend in the factory to bring improvements to the car and get it ready to head to the next race, and that shows the team’s dedication to turning the situation around. ‘Of course, we must be realistic, it will take time to make the gains we want, but we’re learning as much as we can from each race and finding avenues to push us forward.’

Hamilton has vented his frustration at Mercedes’ lack of speed this season. He insisted his team were a long way off competing this season after only managing to finish fifth in qualifying for the Australian Grand Prix. ‘We have not made any progress,’ said the seven-time world champion. ‘I really hope over this next week we can get as much information and figure something out. ‘I wish I could be optimistic and say we have got something better coming, but at the moment we don’t. ‘Winning is a long way off, a second off, so it is a huge gap. I don’t enjoy driving this car but I enjoy the collaboration with the guys, knowing that there is a steep hill to climb and remaining hopeful that we will get there.’ The British F1 driver went on to secure his first podium of the season in the first race in Bahrain, but that was only due to an issue with fellow title rivals Red Bull.

Meanwhile, Russell said his car had the worst porpoising he had ever experienced along the sweeping, lightly curved section of Albert Park where drivers hit high speed before turn nine. ‘We are not in the position where we want to be,’ he told Sky. ‘We need to keep digging into the data and understand. ‘We’ve sort of gone from left, right and centre with the set-up and all have resulted in a similar outcome so we need to try and get on top of things and understand why.’