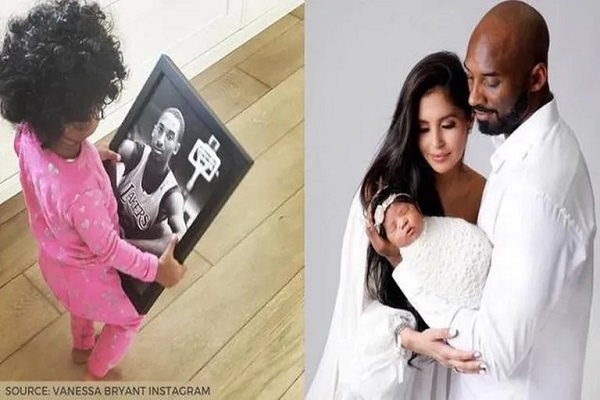 Ever since Kobe Bryant’s death in January, Vanessa Bryant has been consistently posting content about the late NBA legend and her daughters – Natalia (17), Bianka (3) and Capri (1). Vanessa has shared multiple moments together with fans, including Capri Bryant’s first birthday, who was only a few months old when Bryant and their 13-year-old daughter Gianna lost their lives. Vanessa’s latest Instagram post featured their daughter Capri, who was holding an old Kobe Bryant photo.

“Dada,” is the one word Capri says, as she walks while she looks at Bryant’s photo. The video starts with Vanessa asking “koko” who that is, to which Capri says “dada”. Vanessa later tells Capri she’s correct, before the toddler repeats the word once again. “Dada loves you”, Vanessa adds, before the video stops. Capri, who is the Bryant’s youngest, is nicknamed “Koko-bean”.

Capri Kobe Bryant looking at a picture of her father. 🥺💜💛#MambaForever
(via VanessaBryant/IG) pic.twitter.com/5H9hgA6NMn

In May, Vanessa had shared an adorable video of an 11-month-old Capri taking her first steps. ‘My Baby!!!! So proud of my Koko Bean’ her Instagram caption read as she informed her followers of how Capri walked from her aunt Sophie to her. In June, Vanessa shared photos of Capri’s first birthday celebration. “Capri Kobe Bryant a.k.a. ‘Koko-Bean’ named after her dearly missed daddy, Kobe Bean Bryant ❤️We miss you SO much Gigi and Daddy,” Vanessa’s heartfelt caption read as she wished Capri happy birthday.

While Vanessa continues to share snippets from her life on her Instagram, the 38-year-old has been in the news after her mother’s controversial Univision interview. Her mother, Sofia Laine, shed tears on camera while accusing her daughter of throwing her out of the Bryant house, demanding the car she gave her back. Vanessa ended up responding to her mother’s claims, furious that she would go on air and discuss their private life.

Vanessa further added that Laine has emptied her apartment (which Vanessa provided for) and removed her jewellery to show that she is without any support. “My husband and I have financially supported her over the past 20 years,” Vanessa added while revealing that she and Kobe Bryant also paid Laine’s monthly alimony. Vanessa also dismissed old rumours about her mother supporting them, revealing that Laine was never physically or mentally with her or the daughters.

Additionally, Vanessa has also decided to file a lawsuit against LA sheriff Alex Villanueva and his department. The lawsuit accuses them of sharing “unauthorized” pictures of the crash site that claimed the lives of Bryant, Gianna and seven others. They further add that “no fewer than 8 sheriff’s deputies at the crash site, pulled out their personal cell phones and snapped photos of the dead children, parents and coaches. The deputies took these photos for their own personal gratification.”