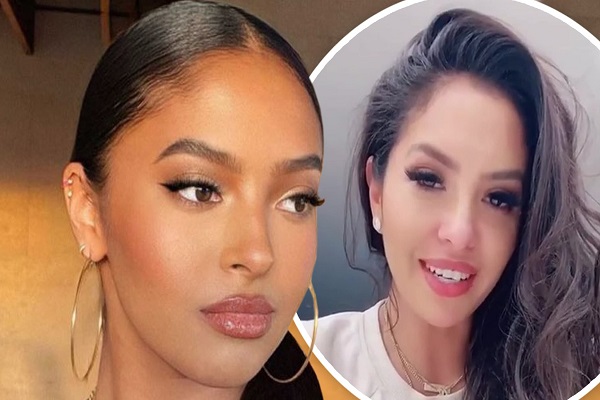 It was announced in February that her daughter had signed a modeling contract with the prestigious IMG agency. And Vanessa Bryant couldn’t help herself on Saturday as she gushed over her eldest daughter Natalia’s glamorous looks on one of her first photoshoots since pursing modeling professional. The 38-year-old widow of Kobe Bryant shared some stunning images of her 18-year-old daughter to

Instagram highlighting her stunning features and impeccably made-up face. Natalia glowed in the closeup in which she wore her lustrous raven locks straight and tied in a ponytail swept over one shoulder. She had on a plunging black dress and wore large gold hoop earrings for a look that seemed to have been inspired by the singer Sade, though she looked like a dead ringer for her mother. My baby (with makeup) ❤️,’ Vanessa gushed in her caption. ‘❤️ Daddy would be so happy that you’re pursuing your modeling career now that you’re 18. You’re beautiful inside and out. Beautiful with makeup and without makeup. We love you.’ She also added the hashtag ‘#grown’ to emphasize that her oldest child was ready to leave the nest. Vanessa reposted the image to her Insta Stories, while joking that her daughter ‘stole my face with daddy’s lips.’

Earlier on Friday, Vanessa posted another elegant image from her daughter’s photoshoot. She wore a gray–brown cashmere overcoat while letting her hair fall down unencumbered. The model-in-training wore the same hoops and also had a silver chain necklace draped around her neck. That’s my baby!’ Vanessa enthused while tagging Natalia.