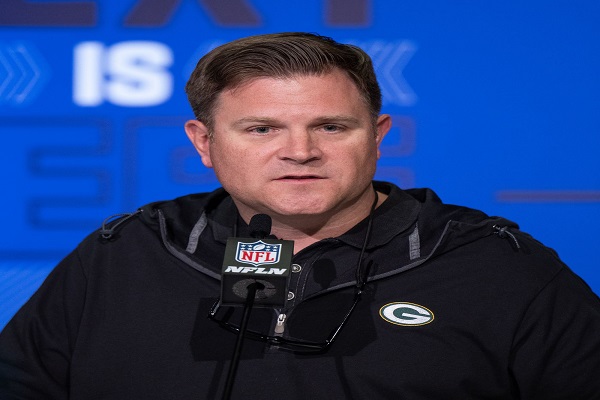 For the first time since 1967, the Green Bay Packers have two first- and two second-round draft picks. And that means Gutekunst — Green Bay’s general manager — has been laying the groundwork for potential trades when the draft begins Thursday night. The Packers own picks No. 22 and 28 in the first round. Green Bay also hold picks No. 53 and 59 in round two.

That means Gutekunst — now in his fifth year as the Packers’ G.M. — has more ammunition than ever before to move around the board. So Gutekunst has spent much of the past week discussing trades that could send the Packers both up and down the board. “There’s been a lot of conversations over the last week,” Gutekunst said Monday. “Certainly there’ll be some more of the next couple days. Certainly it’d be nice to have some of those things ironed out before you got into it, but that’s not always the way it works. Green Bay has a hodge-podge collection of wideouts on its roster today and desperately needs a No. 1. The fastest way for Gutekunst to land an immediate difference-maker would be pairing both No. 1 picks, moving into the top-10 and taking the wideout of his choice. ‘Go big or go home’ has never been the Packer way, though. So it will be interesting to see if Gutekunst goes against the grain and makes a major splash. If Gutekunst sits and waits for pick No. 22 to arrive, five or six wideouts could be gone. But if he moves up into the middle part of the first round, he should get a player that can help from Day 1. “You gotta be careful of falling in love with players, right?” Gutekunst asked. “Because then you start chasing things and getting out of whack value-wise and stuff, so you’d love for it to come to you.

3. Adding a veteran
San Francisco’s Deebo Samuel. Seattle’s D.K. Metcalf. Washington’s Terry McLaurin. Several standout wide receivers across the league such as these three are unhappy or have hit snags in contract negotiations. Whether their current teams would deal them remains to be seen.

If the Packers get a chance, though, to add a proven No. 1 receiver, they should pounce. While rookie wideouts are more impactful than ever (see Ja’Maar Chase and Justin Jefferson), it still takes the majority until Year 2 or 3 to become real difference makers.