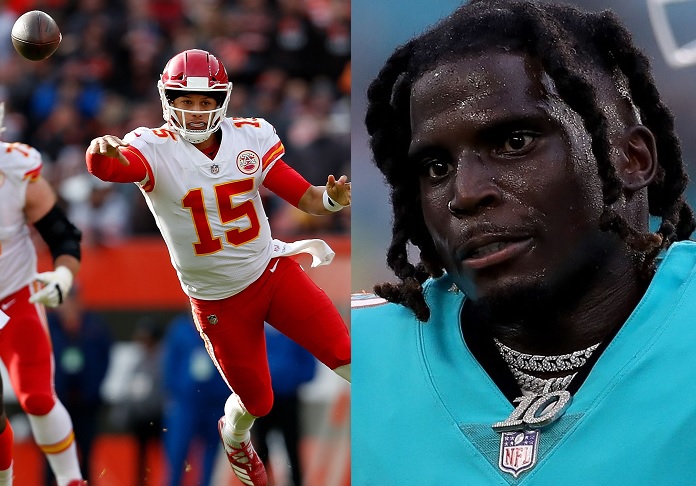 During the Kansas City Chiefs’ 27-24 triumph against the Los Angeles Chargers on Thursday Night Football in Week 2, quarterback Patrick Mahomes demonstrated why he is a unique talent.

Mahomes completed 24-of-35 passes for 235 yards and two touchdowns. While the stat line does not show Mahomes’ exceptional talent, several of his individual plays from the game do. Consider his 41-yard touchdown throw to wide receiver Justin Watson, which he threw over cornerback J.C. Jackson and into Watson’s hands for the score while scrambling in the pocket.

Not every NFL quarterback can throw a touchdown pass. So much so that it piqued the interest of one of Mahomes’ former pass catchers and garnered Mahomes a Twitter shoutout.

Tyreek Hill, a former Kansas City Chiefs receiver who was dealt to the Miami Dolphins in a blockbuster trade this summer, took to Twitter during Thursday night’s game to praise Mahomes.

“Good ball 15,” Hill wrote, while also inserting a teary-eyed emoji at the end of his tweet.

Tyreek Hill is obviously missing out on the quality he was getting while he was still with the Chiefs. Avideo making rounds on twitter explains just how much he wishes his QB is Patrick Mahomes.