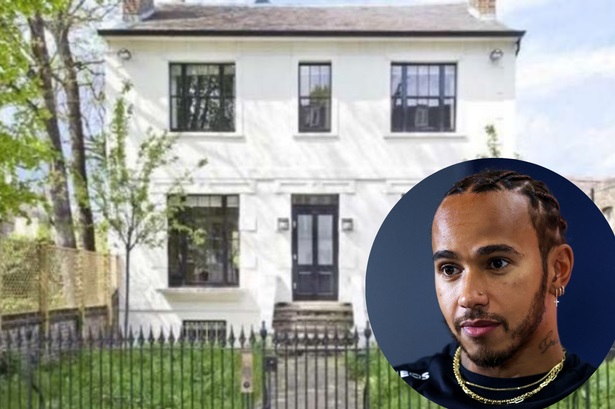 Formula One driver Lewis Hamilton has been given the green light to chop down a ‘beautiful’ sugarplum tree outside his £18m Kensington mansion to the anger of his neighbours. Angry neighbours objected to the decision of the Royal Borough of Kensington and Chelsea (RBKC) Council, arguing that Hamilton would be ‘destroying nature’ if they let him chop down the tree outside his home.

But Hamilton beat out their complaints by providing a report by a tree surgeon which said that the tree was mostly dead and dying anyway. This report swayed the council who gave him permission to chop down the tree entirely and trim back a magnolia bush. There have been various planning battles with local residents over the renovations to his palatial £18million mansion in one of the capital’s most desirable conservation areas. Hamilton has allegedly yet to set foot in the property he bought five years ago while he carries out a grand overhaul. The extensive building work includes a rear extension, summer house and new frontage with a larger security wall and gates to ‘improve the character and privacy of the building’, according to a council planning report.

His garden design team, led by Florian McLaren at Highland Aboriculture, previously won permission to trim a Horse Chestnut tree by two metres, with the application form stating the changes are ‘to reduce shading and reduce loading on regrowth points’. A neighbour backing onto Hamilton’s property supported the application, saying that the large trees can leave ‘pigeon droppings’ all over their garden.

They asked for ‘as many as possible of the horizontal branches, that hang over our property, be pruned back’, adding that ‘the pigeon droppings in that corner can be a nuisance’. In a separate application to the council Hamilton also wants to chop down an Amelanchier tree, also known as a shadbush. His team said the tree is ‘80% dead and in terminal decline’ and asked to cut back the crown of a Magnolia Grandiflora by one to two metres. These trees are not under a Tree Protection Order but are still in a conservation area. In a previous planning application by Hamilton, one neighbour moaned that the ‘current owner bought the property for £18million in 2017 and has never set foot in it’. When the racing car driver applied to demolish the existing summerhouse, there were fears from locals regarding the trees and it being used as a party pad.

Neighbours expressed concern that the property had reportedly ‘remained empty’ while they also disagreed that the trees were in ‘poor’ condition. One said: ‘It certainly does not need another house at the rear of its garden, which, if the owner ever does move in, will no doubt be used as a ‘party house’ away from the main residence, due to the nature of his lifestyle.’ Another said: ‘Since the property was bought, the beneficial owner(s) concealed by the corporate envelope never used it. The property has remained empty to this day, and it is very likely that the PP is being sought to (again) ‘dress up’ an investment for capital gain. ‘It is disheartening to see tree consultants describe the quality of the poplars (and certain other trees) as ‘low quality’.

‘These trees have been there for over 100 years and are part of a magnificent landscaping legacy in this precious conservation area of the RBKC. Their possible demise over time as a result of the construction would seriously impair the value of the neighbouring properties.’ A final one wrote: ‘They are magnificent ‘heritage’ trees, which are easily identified from an airplane upon approach to Heathrow Airport.

‘The report also describes them both as in ‘Poor’ structural condition. I hope that this is also incorrect. In addition, they are considered ‘post-mature’ in age. ‘The combination of these comments makes me concerned that there is a desire to take them down to create more room for the building works.’