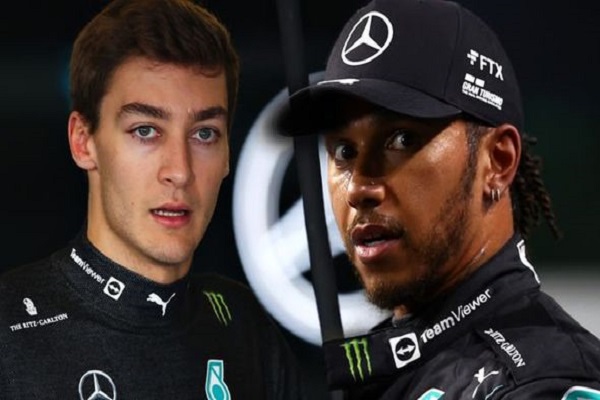 Lewis Hamilton has promised to introduce his Mercedes team-mate George Russell to skydiving after enjoying a pleasant time together surfing Down Under. Russell continued his fine start to life as a Mercedes racer by securing his first podium with the team at the Australian Grand Prix. The 24-year-old also moved to second in the drivers’ standings, despite the team’s cars struggling to compete with the pace of their Ferrari and Red Bull rivals.

The Norfolk racer revealed afterwards that he and Hamilton had taken the chance to go surfing, as they made the most of a week off between races in what will be a demanding season. “Cool surf in Melbourne with LH. Think I’ll stick to four wheels…” he wrote on social media along with a photo of the pair posing with their boards. Hamilton shared the same snap with his massive army of Instagram followers, writing: “Got in as much surfing as I could in Melbourne. It’s so good for training, I’m trying to get the whole team on boards, so far I got @georgerussell63. He’s… getting there.” He is clearly not out of ideas when it comes to more extra-curricular activities with his new team-mate, as he also wrote on Twitter : “Next up – getting @GeorgeRussell63 to skydive.”

Russell appeared to be up for the challenge, but in a cheeky response added: “Not going tandem with you though.” Hamilton is far from a skydiving novice, having picked up the hobby over the past few years. He recently took on the challenge in Dubai, and later posted a short video of himself flying through the air. “Had the best day yesterday. A very ideal way to spend a Sunday,” he wrote alongside the footage. “I’ve been sky diving for a couple years now but naturally through the pandemic I didn’t get to go. Got 10 jumps in, learned something new each time. It’s such a great way to clear the mind, recentre and refocus on the week ahead.” The good-natured online banter and the fact they seem to want to spend some of their spare time together hints at a strong early relationship between the two Brits. Hamilton has not always seen eye-to-eye with his team-mates, having endured difficult relationships with the likes of Fernando Alonso and Nico Rosberg in the past.