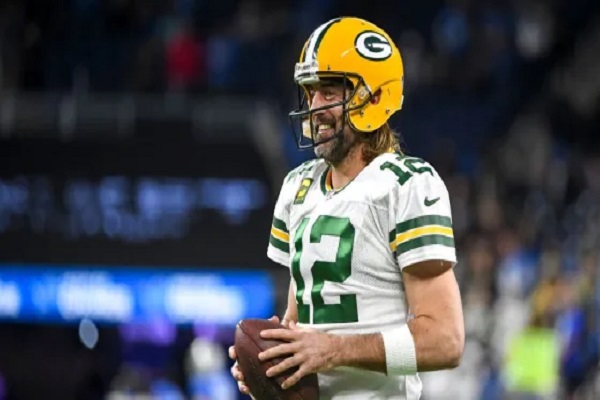 Aaron Rodgers isn’t exactly known for throwing interceptions, so whenever you pick him off, you definitely have to celebrate and that’s exactly what one college kid did during a recent charity football game. The twist here is that celebration actually turned into a taunt that seemed to briefly rub the Green Bay Packers superstar the wrong way. The NFL shared a clip of the

interception this week and the clip has everything you could ever want out of a charity football game: A star NFL quarterback gets picked off by a college kid, who will be playing at the D-II level next year. Let’s watch it all go down. In the clip, Rodgers gets picked off by a player named Darius Maxwell. Not only did Maxwell pick off the pass, but he also GAVE THE BALL BACK TO RODGERS.

That would be like hitting a home run in baseball and then tracking down the ball so you can give it back to the pitcher. If an NFL player actually did this in a game, I’m guessing they would be flagged for taunting and banned for life. Free agent cornerback Josh Norman was at the event and he was even shocked that Maxwell had the gall to give the ball back to Rodgers.

Maxwell explained the situation during a recent interview with Sports Illustrated. “That just happened,” Maxwell said of handing the ball back to Rodgers. “I don’t even remember what made me want to give him the ball. Josh Norman was there, too. Josh was like, ‘That’s the first time I’ve ever seen someone to do that in person.’ I said, ‘I know. That’s why I did it.'”

As you can see in the clip, Rodgers didn’t seem thrilled that the person who intercepted him ran directly back to him and gave him the ball. The reigning NFL MVP responded by throwing the football at Maxwell’s legs. “It’s crazy,” Maxwell told SI. “During the play, I didn’t even know he threw the ball [toward me]. Everybody in the camp told me he threw the ball [toward me]. I didn’t know until I saw the video.”

It’s impossible to know if Rodgers was actually upset about the taunting without asking him. I mean, let’s he honest, he could have also been paying homage to Peyton Manning’s famous “Saturday Night Live” skit. Even if Rodgers was upset, it was only for an instant. Rodgers and Maxwell were back on good terms after the game was over. “Aaron, he’s a very competitive and very nice person. He was very, very nice. Very nice,” Maxwell said. “Right after the game, he was asking us about our story and how it is in JUCO. He’s unbelievable.” According to SI, Maxwell will be attending Division II Wheeling (W.Va.) University this year after spending the past season at a junior college in California (Saddleback College). So how was Maxwell able to pick off Rodgers? He gave the details to SI.

The man BAITED a four-time NFL MVP into throwing an interception! Rodgers only threw four picks during the entire 2021 season, so anytime you intercept him, it’s a big deal, even if it’s in a charity game. The play actually happened on March 12, but video wasn’t released until this week, which means if Maxwell’s friends didn’t believe his story before, they’re definitely going to believe it now.

Former NFL QB Mark Sanchez was also playing in the game and apparently, Maxwell picked him off three times, which might explain why he’s not in the NFL anymore. The event, which also featured Sam Darnold, Kyle Allen, Equanimeous St. Brown, Donte Whitner, Carson Palmer, Sanchez and Matt Leinart, ended up raising $400,000 for charity.

Which players do mock drafts think are headed to the Green Bay Packers?