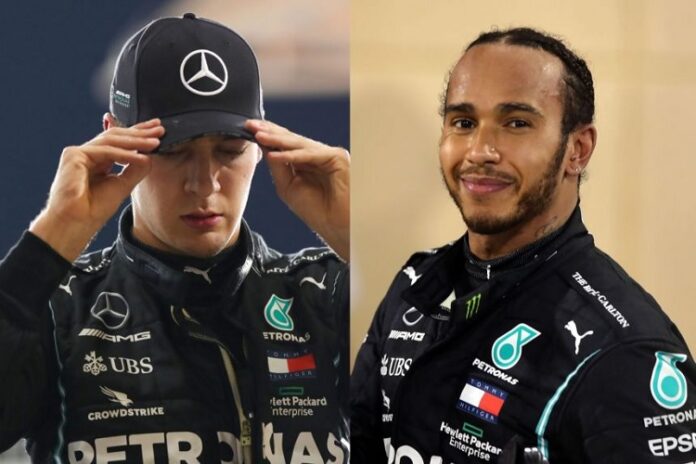 Former Formula One driver Gerhard Berger says George Russell will eventually “get on the nerves” of teammate Lewis Hamilton if he retains his early season lead. Despite Mercedes’ poorest start in a season in nine years and a lack of championship contenders, Russell, in his first year with the team, is presently ahead of the seven-time world champion in the standings following strong early results.

Following his fourth-place result in the Emilia Romagna Grand Prix last time out, the 24-year-old is the only driver on the grid to have begun the season with four consecutive top five finishes. Hamilton, on the other hand, had a disaster in Imola, finishing 13th and well outside the points. For much of the race, he was stuck in lower-field traffic, dropping him to eighth in the championship and 19 points behind his British rival. Berger, who won 10 Grands Prix between 1984 and 1997, says that while the pair’s relationship has been cordial thus far, it wouldn’t be long before Russell becomes a nuisance to Hamilton if their early season record continues.

‘He will soon get on Lewis’ nerves,’ said the former McLaren and Ferrari driver, according to Speedweek.com. ‘Russell was one of the most impressive drivers in Imola. ‘Lando Norris and Max Verstappen, for example.’ Meanwhile, Russell believes Hamilton will recover at some point this year after a slow start to the season. Hamilton’s performance has been less consistent than Russell’s. He has demonstrated that he is faster than the former Williams driver, out-racing him in the season opener in Bahrain to claim a podium before putting significant pressure on him in the Australian Grand Prix when the two battled for third. Russell feels that Hamilton’s finest days are ahead of him after the Mercedes team overcomes the porpoising issue that has hampered the team’s ability to compete with Ferrari and Red Bull at this early point of the season.

Russell told Sky Sports F1, ‘Lewis has clearly got the pace.’ ‘He’s really quick, and he’s demonstrated that so far this year, but it’s been difficult for us as a team to get it done when the time comes.’ Lewis has been incredibly quick even when things have been more steady.

‘I know there was a blip last weekend, but I have no doubt he’ll be back, and the way he’s pushing and rallying the squad is genuinely remarkable.’ We’re all looking for more. He desires more. Nobody is content with where we are right now.’