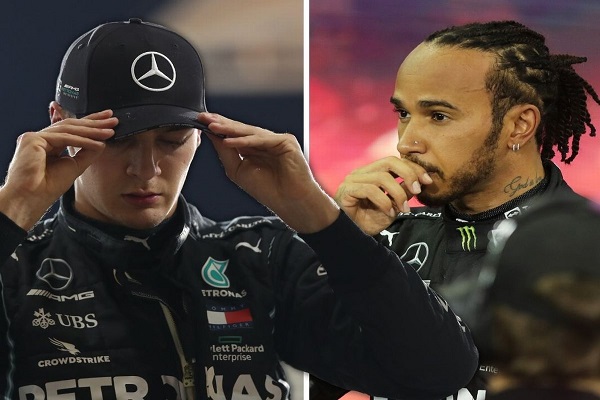 Former F1 star Gerhard Berger believes George Russell will soon ‘get on the nerves’ of team-mate Lewis Hamilton if he maintains his narrow early season advantage. Although Mercedes have got off to their worst start in a season for nine years and look well short of competing for the title, Russell, in his first year with the team, is currently ahead of the seven-time world champion in the standings following positive early results.

The 24-year-old stands fourth in the world championship and is the only driver on the grid to have started the season with four consecutive top five finishes following his fourth place finish at the Emilia Romagna Grand Prix last time out. Hamilton by contrast endured a nightmare at Imola, finishing well outside of the points in 13th having been stuck in lower-field traffic for much of the race, leaving him seventh in the championship and already 19 points behind his British compatriot. Berger, who won 10 grands prix in a career spanning from 1984 to 1997, believes that while the relationship between the pair has been good so far it won’t take long for Russell to become an irritant to Hamilton should the early season form continue.

‘He will soon get on Lewis’ nerves,’ the former McLaren and Ferrari star was quoted by Speedweek.com. ‘Russell was one of the outstanding drivers at Imola. Like Lando Norris and Max Verstappen.’ Meanwhile, Russell expects Hamilton to bounce back at some point this year following a poor start to the season from the 37-year-old. While Hamilton’s form has been less consistent than Russell’s, he has shown he can be faster than the former Williams driver, out-racing him in the season opener in Bahrain to gain a podium before applying heavy pressure at the Australian Grand Prix while the duo battled for third. Russell believes that the best of Hamilton will soon come once the Mercedes team overcome the porpoising problem that has severely harmed the team’s ability to battle Ferrari and Red Bull at this early stage of the campaign.

‘Lewis has clearly got the pace,’ Russell told Sky Sports F1. ‘He’s incredibly fast and he’s showed that so far this year, but it’s just been tricky for us as a team to get it done when the time is needed. ‘When things have been more stable, Lewis has still been massively fast. ‘I know there was a bit of a blip last weekend but I have no doubt he’s going to come back and the way he’s pushing the team and motivating the team is truly inspiring. ‘We all want more. He wants more. Nobody is happy with the position we’re in currently.’